The world fades away from democracy. More and more governments concentrate on one person. One person is not great enough to carry the burden of bringing democracy and prosperity to the people. This article gives an introduction to the building blocks of democracy. In many countries on all continents of the earth one or more of the building blocks are missing. Without the Rule of Law rulers become dictators and rebellion or war will be the result.

Democracy is possible with the Rule of Law. The Rule of Law needs four foundations which are shown in the Democratic Triangle. Democracy needs essential Four Freedoms, it needs an independent organisation of the Legal power, every citizen must have and access to the Law. And every citizen must be equal before the Law. After the foundation of the Rule of Law the government shall organize free and private elections. Every citizen may be elected or has the right to elect. Every chosen representative shall be free to rule without any burden. Citizens may correct the representatives by referendum.

The Rule of Law.

Democracy starts with respect for the Four Freedoms of the government towards the citizens. Respect the freedom of speech, expression and assembly. Admit the freedom of worshipping God and any other conviction. Organize the freedom of fear and secure a safe life for everyone. Arrange the taxes in such a manor the there is freedom of want and prosperity for all. 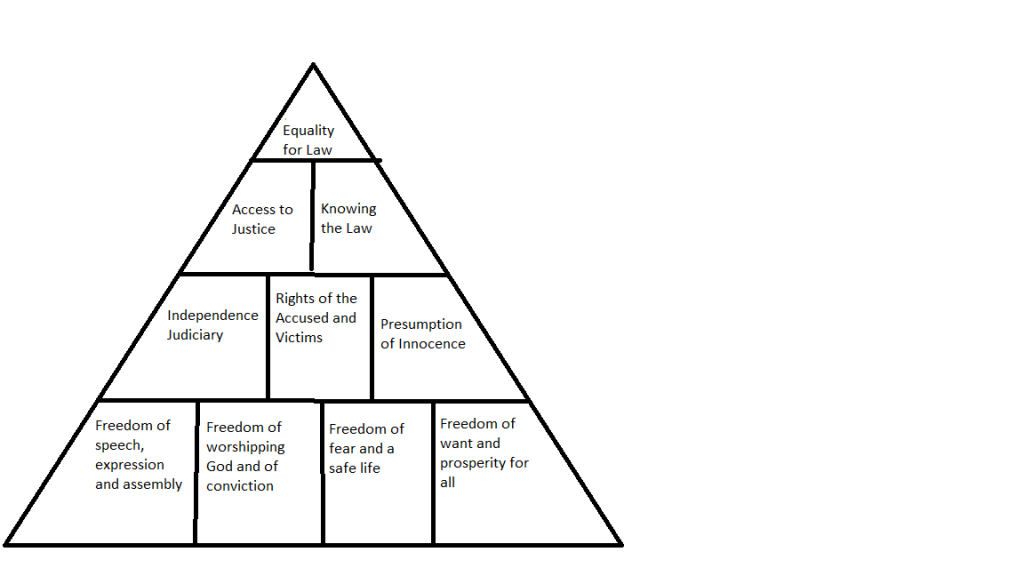 The second layer is how the government organizes the Legal powers. There should be a trias politica, a separation of powers. executive, legislative, and judiciary powers of government should be divided into different branches and not concentrated in one. This implies an independent Judiciary with which accused people are innocence until proven otherwise. The victims have equal right in the Law as the accused.

The fourth layer of the Rule of Law is the most important one. Every citizen within a country and every immigrant are equal for the Law. Every adult man and woman of any colour, race, religion or in whatever circumstance shall be equal. Equality goes beyond the equality before the Law. Children below the age of 18 years old shall be protected and shall be the responsibility of the parents and if they cannot provide a safe household the government should do.