Tuesday, March 16, Israel Finds New Dead Sea Scrolls. New fragments of a Dead Sea Scroll have been discovered during an exhaustive survey of every nook, hole and cranny in the Judea Desert. The fragments tell us to be Honest or to feel the Fury of God. Read more . . .

We live in a world without Respect. We label people. Many people live in a cocoon with their own view on Good or Evil. This does not create Respect. It creates Hell. Many people emphasize the cocoon of the own group and want to maintain this cocoon by violence. Violence kills Respect. Respect starts with realizing that every human being is different and yet every human being is equal to the other. Every human has physical and psychological borders. Cocoons and borders can change if the change leads to Happiness. Respect brings Happiness. Read more . . .

Mankind is in chaos. Due to dishonest China the world has to deal with the corona pandemic. The Corona pandemic took 2,2% deaths of over 100 million infected people and is still increasing in severity. The climate change is another plague for mankind that cannot be ignored. Temperature in several parts of the world rises to over 40 degrees Celsius. Temperature in the arctic Siberia rises to abnormal 30 degrees Celsius in June. Wildfire carbon dioxide emissions from the region last month were an estimated 59 mega tonnes. The climate change effects in Siberia may have caused the massive floods in China and may be the preface of an accelerated climate change for the world. Dishonest economy caused the climate change. Shall the climate change erase mankind like it did the dinosaurs ? Read more . . .

2020 will be the Year the World Stood Still. Caused by a world-wide China Corona (COVID-19) Virus pandemic. A Biological World War III is at hand. The COVID-19 virus killed until today more than 2,3  million people. More then the atomic bombs in World War II. The Corona Virus originates from China. The information from China was too late. The second wave of corona is at hand. The World experiences a lack of essential freedoms due by China. The freedom of religion has gone, no church or mosque meeting can be attended. Many people experience a lack of want because they are without a job. Everyone has fear he or she or relatives will be infected with the deadly corona virus. With the social media fortunately we still have the freedom of speech. This article describes some aspects with which we can get the essential freedoms back. The four essential freedoms of the Free World should be restored. Read more . . .

2021, How to stop the Corona virus outbreak.

2021,  USA, Europe, Russia and China and many other countries of the world face a pandemic of the corona virus. Every month the number of registered infected people with the China corona virus doubles. The death toll decreases from 5% to 2,2%, the number of recovered people increases from 58% to 74% now. The figures about the corona pandemic are not clear. We ask the head of states of the countries of the world to work towards clear and honest numbers of corona patients and deaths. The people must be informed honest. Self testing may be done with an oximeter. Vaccines are developed and many countries apply these . The US, Russia, Europe and China should work together to solve this outbreak. Within the US, Republicans and Democrats should work together to win this War on Corona. Read more . . .

2021, The Universal Declaration of Democracy.

The World is in chaos. In many countries the citizens no longer feel themselves represented by their government. From chaos civilian war may rise. In order to bring PEACE to the world we herewith propose the Universal Declaration of Democracy. This declaration has been sent to the United Nations Messengers of Peace. Read the Declaration

Victory for the Democracy in Britain.

From February 1 2020, Britain has left the European Union. The Brexit referendum comes into effect. This is a Victory for the Democracy in the United Kingdom. Read more . . .

From Coalition to Numeration.

Many European countries face the fact there is no possibility to form a coalition cabinet. This is also true for the European Union itself. The coalition formation is troubled more and more because the old political parties do not want to negotiate with the new political parties. The coalition formation is blocked by the ‘sanitary cordon’ in which new parties are excluded from the formation of the executing cabinet. New elections do not always bring the solution. The solution is to form the cabinet by numeration of the number of votes. In the future this can be done immediately after the election. Read More

Socialism has been assimilated by the cultural relativism. Socialism has been the foundation for political activities who benefit active and former working people. Nowadays social parties have lost their foundation and aim for immigration and more Europe. Immigration gives other cultures which do not integrate and have to be supported by the working class. The working class has to deal with more expenses for the cultural relativism with no wage increase. The benefit of socialism for the active and former workers has been lost. With the decline of socialism the workers search for benefits by populist parties. Populism are against cultural relativism and promises purchase power, which in fact benefits everyone. Read more

On the Origin of Climate Change by Means of Population Growth.

The climate is changing due to the increase of CO2. Many governments, scientists and even school teachers blame the burning of fossil fuels. But the main origin of the climate change is the population growth. From 1900 the world population grew from 1.6 billion to 7.7 billion today. The CO2 emission pro capita (for each person) 6 metric tons today. The Population growth is the origin of the Climate Change. The burning of fossil fuels will end in the next 40 years because there will be no oil anymore. See our article The oil runs dry in 30-40 years. The focus on climate change because the CO2 level rises, should be changed to the focus on the energy transition. Read More 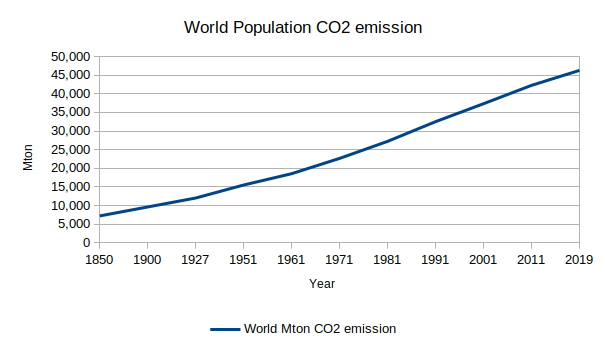 Five elements help you to Enter Your Force. Air, start breathing through your nose. Earth, start eating healthy. Fire, start moving. Water, start drinking healthy. But what is the fifth element? This is the quintessence. Today, what man eats makes man sick. Many people live unhealthy. This declines your force and energy. On the one hand due to behavior and due to insufficient information your force and energy are too less. Smoking, drugs, too much alcohol, too many carbohydrates, burned meat, too much fat or sugar make people addicted and ill. The doctor soon comes with a chemical pill to solve the problems caused by diet. And you feel sick. Read this article and see how you will get your Force and Energy again. Read more

Has the EU lost its magic?

The Brexit made clear the UK public think the EU has lost its magic. The rise of populist parties in other EU states is another indication the EU dream is fading away. The main problem is the promise of democracy and prosperity has been broken. The EU declared the European State with the treaty of Lisbon (2009). With it the European States have lost their democratic foundations. The EU people did not vote to live in an European State. Read more . . .

On the origin of Cancer by means of cell fusion.

Mankind has reached a high level in curing disease. A general cure for cancer has not yet been found. The past 40 years it has become clear, that all kinds of cancer share the same characteristics. The nature of many of these characteristics are unknown.The development of a cure starts with knowledge about the origin of a disease. This paper proposes the hypothesis that the first cancer cell is “born” after a cell fusion. We discuss today’s cancer theories, aspects of abnormal and normal cell fusion and indicate the cancer cell fusion mechanism from which you may understand the cancer mechanism. Read more . . .

From Migration to Segregation?

There is a migration of people going on. Under inhuman conditions. There are many people who apply for asylum in the civilized European Union. People are entitled to this under international law and human rights. But with this huge crowd of people some structure is necessary. There is a distinction between real refugees and economic asylum seekers. Read more . . .

In the State of the Union on January 6th 1941 for the American Congress, Franklin Delano Roosevelt  spoke out the Four Freedoms Speech. This speech marked the vision with which the US started to cure the evil in the world at that time. This was necessary because some countries (Germany and Japan) crossed the border of the world civilization. At this time again some countries are at a point in which they may cross the border of civilization and commit an act of physical aggression to their neighbor or to the people within their state.  Read more

The Freedom of Expression.

The Freedom to Worship God.

The second essential freedom is freedom of every person to worship God in his own way– everywhere in the world. See the world of today. A world full of war, famine and terrorism. Many people live day by day and life is the highest priority.  In such a world worshipping God has the last priority. What do we need to do to create a world of tomorrow in which every person anywhere in the world is free to worship God. Read more

The third of the Four Freedoms, is freedom from want, which, translated into world terms, means economic understandings which will secure to every nation a healthy peacetime life for its inhabitants –everywhere in the world (President F.D. Roosevelt) After the currency inflation of the Euro the people do not benefit anymore of the economical vision of the European Union. This is due to the political ambitions. The Brexit was a sign that the people resist the increasing decadence. With the Brexit the budget of the European Union should decrease. But the European Commission wants more budget to increase their power. This will minify the freedom of want and the prosperity will decrease. Read more

The world fades away from democracy. More and more governments concentrate on one person. One person is not great enough to carry the burden of bringing democracy and prosperity to the people. This article gives an introduction to the building blocks of democracy. In many countries on all continents of the earth one or more of the building blocks are missing. Without the Rule of Law rulers become dictators and rebellion or war will be the result.  Read More

The civilization of today runs smoothly on oil. The fossil fuel oil is very hard to win and shall in time no longer be present in the Earth for thousands of years. The political and economic exploration of oil is a question that should keep us busy in the coming decades. Read more

Donald J. Trump is the 45th President of the United States. He believes the United States has incredible potential and will go on to exceed anything that it has achieved in the past. His campaign slogan is Make America Great Again. He will be very nasty for those people who cross the border of civilization.