Mankind has reached a high level in curing disease. A general cure for cancer has not yet been found. The past 40 years it has become clear, that all kinds of cancer share the same characteristics. The nature of many of these characteristics are unknown.The development of a cure starts with knowledge about the origin of a disease. This paper proposes the hypothesis that the first cancer cell is “born” after a cell fusion. We discuss today’s cancer theories, aspects of abnormal and normal cell fusion and indicate the cancer cell fusion mechanism from which you may understand the cancer mechanism.

The most common characteristics of a cancer are uncontrolled division of cells, a genetic change in the chromosomes of the cells and an invasive character. Some other characteristics are less known. The body defense cells do not react, the shape of cancer cells is usually different, cancer cells seem to live forever, and cells do not have contact inhibition. If all kinds of cancer share the same characteristics, then all types of cancer share the same mechanism of origin. We know now, that a cancer starts with only 1 transformed cell. 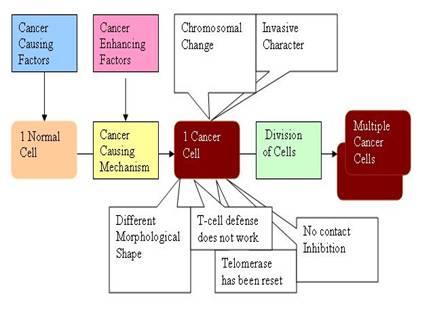 The question of the origin of cancer will be answered by the mechanism that transforms one normal body cell into one cancer cell. Scientist today say the first cancer cell is transformed after multi genetic mutations. Furthermore they think, because tumor suppressor genes are absent or defective, unlimited division of a cancer starts. The cancer theories of today do not explain all characteristics of cancer cells. It is not known, why body defense cells do not react, what the cancer cell life prolonging mechanism starts, why the cancer cells have a different shape and so on.

This post is a new theory about the mechanism for the origin of cancer which explains all aspects by cell fusion. From the clonal point of view a cancer comes after division of cells from 1 transformed cancer cell. A cancer causing mechanism has transformed 1 normal body cell into the cancer cell. The transformation begins after cancer causing factors and with cancer enhancing factors.

Cancer cells have different characteristics then normal cells. Thereshape is different, their nucleus is larger and they have or may not have a chromosomal change.Cancer cells show an invasive character and no contact inhibition like normal cells would do when they divide. When dividing, a cancer shows anaplasia, a lack of normal cellular differentiation. The body cell defense cells like the t-lymphocytes do not act on cancer cells. When dividing, cancer cells seem to live forever. The number of divisions a cell can do is determined by telomeres. They seem to be reset.

Almost fifty years ago it was shown, that it is possible, to suppress malignancy by cell fusion. The experiments focused on the cell fusion product (hybrid cells) of tumor cells and normal cells. The hybrids that are at start normally nontumorigenic, propagate later to be tumorigenic. If the tumor were caused by loss of an important regulatory gene, than by cell fusion with a normal cell it would be gained again. This regulatory gene is called a tumor suppressor gene. The study of familial cancers is a second line of evidence. At birth there is no tumorigenic activity. In later life a tumor may come forth. [2, 1996, Leis, Livingston].

On the origin of cancer by means of cell fusion.

It’s our opinion, that normal Mendelian Laws apply. They say, that when the Parents) cells fuse, the F1 (first generation) will always show the same result of dominance. The fusion between a tumor cell and a normal cells is always at first nontumorigenic (the F1 generation), later it may differentiate to tumorigenic. Familial cancers show the same appearance. 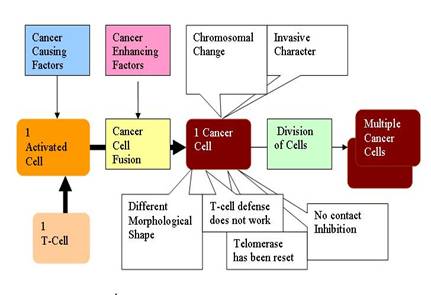 All kinds of abnormal cell fusions are possible. You could make all kinds of hybrids (combinations of cells from different species) and clones (combinations with the purpose to make a copy of an organism). When organisms are cloned, two cells are fused. You take a body cell from the organism that is being cloned. The second cell will be a female sexcell without the nucleus, only the DNA of the mitochondria’s rests. With an electrical pulse the cell fusion takes place. Then the fertilized egg cell is implanted into the womb of a female who will give birth to the clone.

It is possible to fuse cells from man and animals. It is i.e. possible to make a combination of a mouse cell (from a continuous growing cell mass) and a human blood cell (a lymphocyte). With a Sendai virus a combination occurs. After selection with aminopterin a human-mouse hybrid cell is formed. An avian red blood cell (an erythrocyte) and a human cell (a fibroblast) may combine. After addition of an inactivated virus, hemolysis of the erythrocyte and fusion with the fibroblast takes place. The result will be a big cell (a heterokaryon) with two nuclei.

The characteristics of cancer are part of the mechanisms involved in multiplication. The missing links are the fertilization by cell fusion and the meiosis (chromosomal division). The logical precedence of the biological multiplication mechanism in cancer will be:

Why first fertilization by cell fusion? Because cancer cells many times are greater than normal cells and haveoften a multiploide nucleus, cell fusion happens first, with the chromosomal combination. After this meiosis may or may not occur. To our opinion the multiplication mechanism of a cancer may be compared to the multiplication mechanism of lower biological organisms. From the abnormal cell fusion, chromosomal mutations come forth. From the Mendelian Laws, the chromosomal change for a specific type of cancer will always be almost the same. Yes, we know more and more about genetic changes, but we are still looking at a result, not the cause of cancer. Main aspect of the biological mechanisms will be that cell division starts after cell fusion as a natural phenomenon, it is not initialized from chromosomal mutations. The chromosomal change is derived from the cell fusion by combination of chromosomes. In all reproductions the children will look alike their parents.

A cancer cell will also look alike its parents. Because a cancer will arise in many parts of the body, without question, one of the parents will be a cell from that part of the body. In example lung cancer comes from a lung cell. The second cell should be mobile, because it needs to approach the body cell. Furthermore it needs to have invasive powers. Only the white blood cells, the t-lymphocytes do have these characteristics. A cancer cell thus is formed by a cell fusion between a body cell and a t-lymphocyte (a T-cell). A second line of evidence for the cell fusion with a T cell is the fact that a cancer is not attacked by body defense system in general and the T-cell in particular. Probably they recognize a cancer as “self”. A third evidence for the cell fusion with a T cell is the quicker growth after contact with blood vessels, which is the normal environment for T-cells. After the cell fusion, a chromosomal combination happens. This would explain the sometimes large cancer cells. The multiploide nuclei are not natural, after the chromosome combination a division of nuclei may happen. Because the unnatural character of the cell fusion, chromosomal mutations come forth.

From the Mendelian law, the chromosomal change for a specific type of cancer will always be almost the same. Yes, we know more and more about genetic changes, but we are still looking at a result, not the cause of cancer. Over 90% of cancer cells show telomerase. Telomerase is an enzyme that is expressed normally early in embryo. It prolongs the number of cell divisions through addition of telomeres to the body of the chromosomes. Repression of telomerase is not under control of genes known until now. This fact is to our understanding AGAIN proof of the birth of a new organism within a biological specimen. Cancer cells show no limits in contact inhibition. In culture normal cells stop growing when they touch each other. T-Lymphocytes have invasive powers and cancer cells may have inherit their lack of contact inhibition from them.

Today 35% of the cancer deaths could be avoided if people change their diet. There would be 30% less cancer deaths if people do not smoke. If we had more save sex, 7% of the cancer death could have been avoided. The people need more information about diet, their cooking ways and cancer. For example heterocyclyc amines (HCA’s) are the carcinogenic chemicals formed when cooking muscle meats such as beef, pork, fowl and fish. It was shown, that frying, broiling and barbecuing (muscle) meats produce high amounts of HCA’s, whereas stewing, boiling or poaching almost no HCA’s were showed. Milk, eggs and organ meats have very little HCA content naturally or cooked. Ways of safe eating could be developed. Today it is well known that a high percentage of cancer comes from smoking. The people are well informed about this. Nevertheless, not many people stop smoking.

The government could increase the price of tobacco products, but they should also start general information, education and training programs to decline the use of it. It is wise to forbid the selling of tobacco products to children under the age of 18. There should be a bonus if one reaches this age without smoking (or drugs). Instead of smoking, children could learn the safe breathing ways of Yoga. We advice all churches to admit safe sex. Beside the use of safe sex, methods for declining cancer from reproductive factors must be developed. The above save methods are idealistic, we live in a free world. Every man or woman has its own wish to eat what he or she wants or to smoke. For the next generations there will be cancer. The estimates are that a higher percentage of people will have cancer. This theory “on the origin of cancer by means of cell fusion” may open a new frontier in the war against cancer.